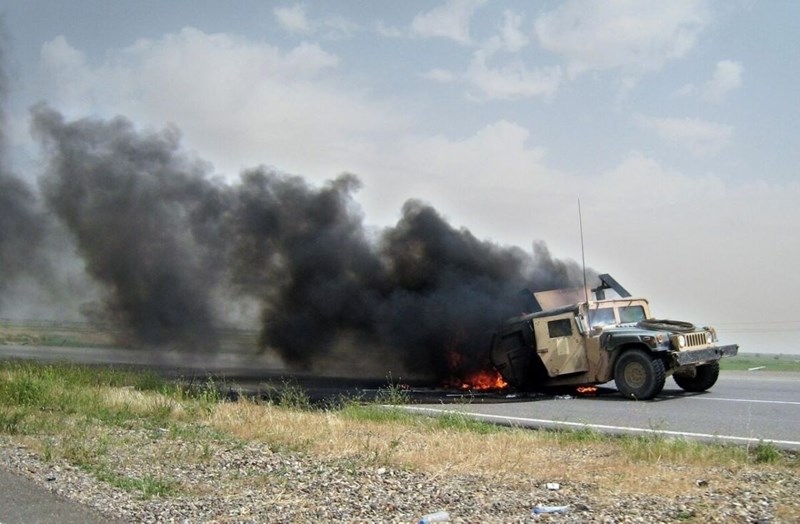 File image. A US military vehicle burning on the side of a road after it was attacked in Iraq’s Basra province on 26 December 2021. (Photo credit: Al-Mayadeen)

A US military convoy was hit by an Improvised Explosive Device (IED) in Al-Diwaniyah province in southern Iraq on 6 February, in the latest waves of attacks targeting US soldiers.

According to local media reports, the convoy was moving military equipment between US bases in the region. The blast left one of the vehicles in the convoy extensively damaged. The reports did not indicate if any deaths or injuries were recorded.

No group has claimed responsibility for the attack so far. The government of Iraq has instituted an investigation into the incident.

Resistance groups opposed to illegal US military presence in the region have in recent months ramped up attacks on American troops across Iraq and Syria. Dozens of military convoys and bases have been targeted by bombs, missiles and drones.

The attacks spiked during the first week of January 2022. The escalation coinciding with the second anniversary of the US assassination of  Iranian Quds force Commander, Qassem Soleimani, and the Deputy Commander of Iraq’s Popular Mobilization Units (PMU), Abu Mahdi al-Muhandis.

The killing of the two senior military commanders who played a decisive role in the defeat of ISIS caused an uproar across the region and increased demands for the expulsion of all US troops from West Asia.

The resistance groups have declared that the attacks on US soldiers will continue until they fully exit the region. They say the US occupation of Iraq and Syria is not only an infringement on the sovereignty of the two countries but also creates a conducive environmental for the existence of armed groups that are destabilizing the region.

In early 2021, the US government agreed to withdraw all its troops from Iraq before the end of the year. However, 2500 American soldiers remain in the country, allegedly to provide advisory and training services to the Iraqi army.