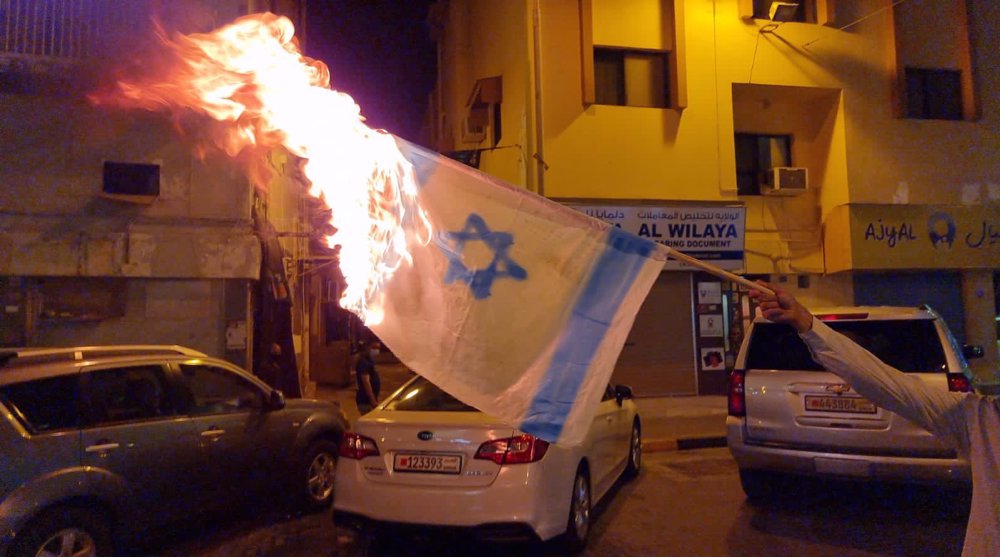 A Bahraini demonstrator sets an Israeli flag on fire during new protests against the normalization of ties with Israel. 16 February 2022. (Photo credit: Press TV)

Dozens of people once again took to the streets of the Bahraini capital, Manama, on 18 February to protest against the deepening of ties between their government and the Israeli occupation.

The protesters carried banners condemning the normalization of diplomatic relations with Tel Aviv. They burnt Israeli flags and accused the rulers of Bahrain of abandoning the people of Palestine and their struggle against the Israeli occupation.

The protests came just a few days after Israeli Prime Minister Naftali Bennett paid a state visit to Bahrain at the invitation of the royal family.

Bennett became the first Israeli prime minister to visit the Bahraini kingdom. According to Tel Aviv and Manama, the aim of the visit was to strengthen relations between the two countries.

On 12 February, Bahrain’s foreign ministry confirmed that an Israeli naval officer would be permanently stationed in the country as part of an international coalition that seeks to “secure freedom of navigation in territorial waters, protect international trade, and confront acts of piracy and terrorism in the region.”

According to Israeli media outlets, the naval officer is expected to arrive in Bahrain in March 2022. It will be the first time that an Arab state will openly host a member of the Israeli occupation forces.

The decision to host the Israeli officer is reportedly part of bilateral agreements signed between Tel Aviv and Manama during the visit of Benny Gantz, the minister in charge of the military affairs of Israel.

The two countries have increased cooperation between their armed forces since normalizing ties in 2020.

On 18 February, Amnesty International revealed that the cell phones of three Bahraini activists had been hacked by the infamous Pegasus spyware developed by an Israeli company.

Bahrain is one of four Arab countries that normalized diplomatic relations with Israel in late 2020 under the so-called Abraham Accords that were brokered by the US government.