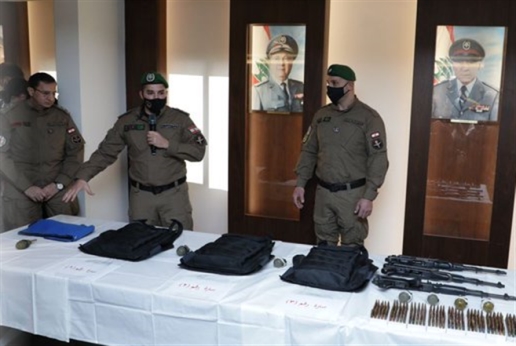 Lebanese authorities from the Information Division of the Internal Security Forces (ISF) foiled three suicide bombing attempts by refugee youth tied to ISIS. Their plan was to reportedly target a number of Shia mosques on the outskirts of Beirut on 23 February.

The ISF additionally released a map revealing the location of the sites that were set to be part of the planned attack, which were identified as the Al-Kadhim Mosque in the Madi neighborhood, the Al-Laylaki Complex, and Al-Nasser Husseiniya in Al-Ouzai. All sites were located in the Shia populated southern suburbs of Lebanon, colloquially known as Dahiyeh.

The state-owned National News Agency quoted Lebanon’s Interior Minister Bassem Mawlawi as saying security forces “arrested a terrorist takfiri network of Palestinian nationals that recruits young people to carry out major operations with explosive belts and missiles that could have caused many casualties.”

Mawlawi said in his statement that the ISIS affiliated network was planning to use small weapons and rocket-fired grenades in addition to the explosive suicide vests.

According to the ISF, the orders for the attack came from an ISIS operative located in Ain Al-Hilweh –a Palestinian camp located near Saida– who has links to Syrian opposition extremists.

The attempted attack is was allegedly planned in response to the death of Ibrahim Al-Hashimi Al-Qurayshi, an Iraqi national and ISIS leader seen as Abu Bakr Al-Baghdadi’s successor. Al-Qurayshi blew himself up during a raid by the US army in northwest Syria.

The ISF also says that the specific instructions for the bomb plot on Shia mosques came from an ISIS operative based in the Palestinian refugee camp of Ain al-Hilweh, who is in touch with fellow Sunni extremists in Syria.

The Lebanese interior minister championed “the Internal Security Forces as the heroes of this operation,” emphasizing the “importance of these forces” in safeguarding security for the Lebanese.

Speaker of Parliament and leader of the Amal Movement, Nabih Berri, also hailed the thwarting of the planned attack, which he said was a direct threat to “Lebanon’s security and civil peace.”