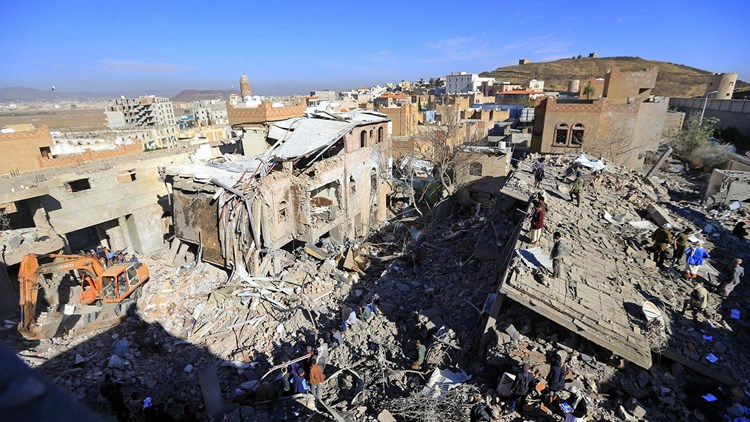 The Saudi-led coalition has intensified airstrikes on Yemen, targeting several regions across the country on 2 March.

According to Yemeni media, the coalition launched over a dozen airstrikes on the northern Hajjah province, while also targeting the Haradh district, a border region between Saudi Arabia and Yemen partly under the control of Ansarallah forces.

A few hours later, Saudi-led coalition warplanes followed up the attack with 22 airstrikes on both Haradh and Hajjah. The fighter jets also targeted the Al-Jubah and Wadi Al-Ubaidah districts of Marib province, as well as the Al-Hazm district of the northern Jawf province and the Baqim district of Saada province.

A Yemeni military source also reported over 120 violations of the ceasefire agreement in Hodeidah in the last 24 hours, as well as the coalition’s use of spy drones, which have been flying over Hodeidah’s Al-Jarrahi and Al-Hays districts.

As of yet, there have been no reports of casualties from the coalition’s strikes.

Yemen’s military media released footage of a US-manufactured Scan Eagle spy drone that was shot down by Yemeni air defenses on 28 February, which is reportedly the 14th Scan Eagle drone to have been shot down by the Yemeni forces since the start of the war.

On the same day a member of Yemen’s Supreme Political Council, Muhammad Ali al-Houthi, blamed the continued Saudi-led aggression on the recent arms sales by the US to Saudi Arabia and the UAE, which were approved last month by congress.

Meanwhile, a senior member of the Ansarallah movement, Abdulmalik al-Ajri, has denounced the extension of an arms embargo imposed by the UN Security Council on the resistance group, stating that the UN does not care about global peace and security.

“The arms embargo contradicts earlier claims made by the UN Special Envoy for Yemen [Hans Grundberg] with respect to the re-launch of peace negotiations. How does he call for peace on one hand and escalates tensions on the other?” Al-Ajri asked.

Al-Ajri also called out the UN’s double standard regarding the situation in Ukraine, adding that the “entire world suffers from the state terrorism of the United States, France and Britain, as they are the countries that have most subjected various races to torture since the 19th century.”