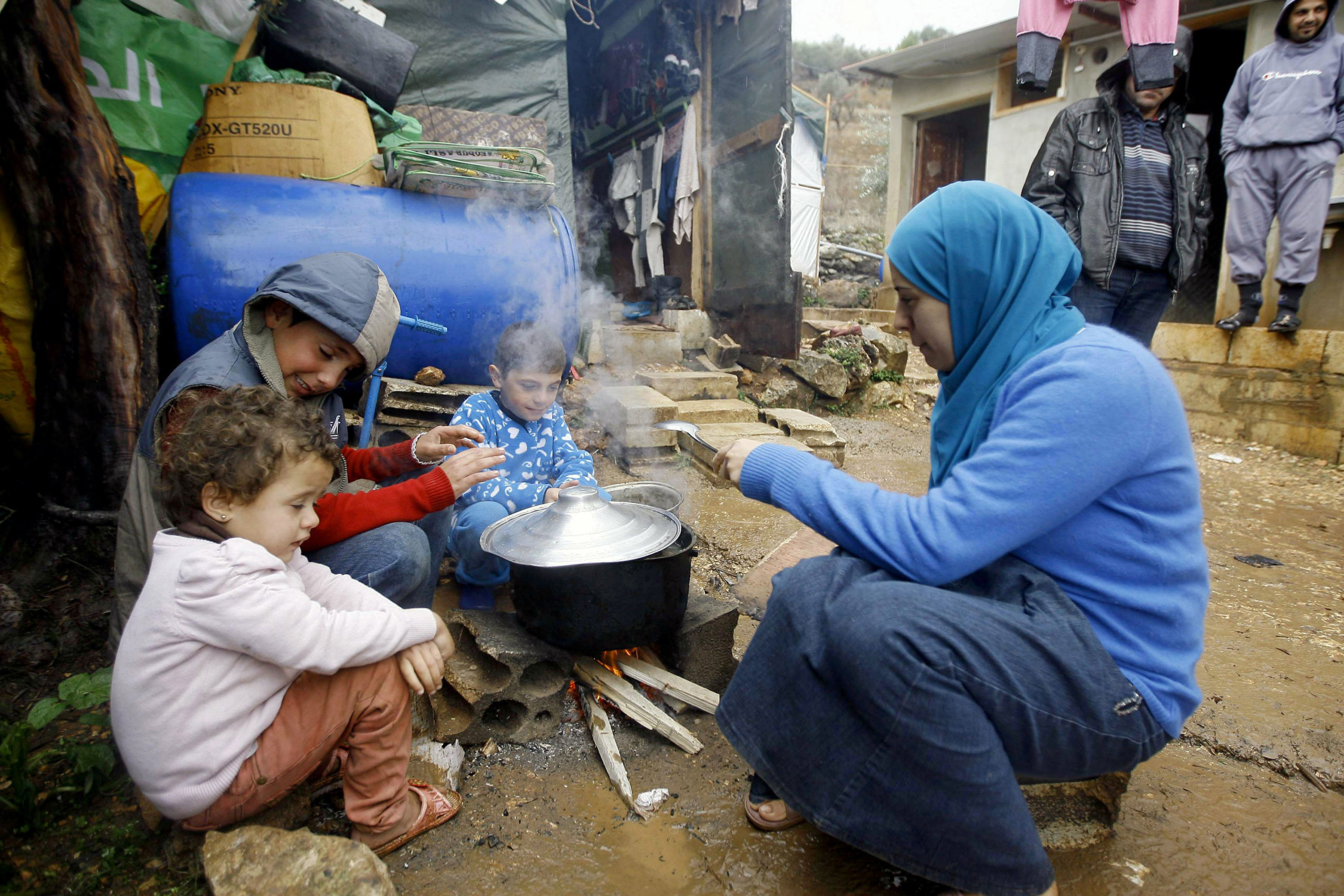 A Syrian refugee with her children prepares food at a refugee camp in the town of Ketermaya, Lebanon. (Photo credit: AP Photo/Mohammed Zaatari, File)

The Ukraine crisis has exacerbated hunger across West Asia and has accentuated the need for regional governments to create, expand, or increase social protection systems, according to a report by Human Rights Watch (HRW) released on 21 March.

“Global food chains demand global solidarity in times of crisis,” an HRW official said in the report, adding that “without concerted action to address the supply and affordability of food, the conflict in Ukraine risks deepening the world’s food crisis, particularly in [West Asia] and North Africa.”

Ukraine and Russia are the world’s leading exporters of wheat, and several West Asian countries depend on the two countries to fulfill their food requirements.

Just weeks after the start of Russia’s special military operation in Ukraine, Kiev banned the exports of rye, barley, buckwheat, millet, sugar, salt, and meat until the end of the year.

On the other hand, western sanctions imposed on Moscow have led to major disruptions in the supply chain, and most countries now face harsh penalties if they continue to do business with Russia, the world’s largest supplier of wheat and major producer of fertilizers.

The HRW reports highlights that countries already grappling with crisis and widespread food insecurity, such as Yemen, Lebanon, and Syria, are particularly at risk.

Price hikes will be acutely felt in Lebanon, as over the past three years the country has been experiencing the worst economic crisis of the modern era, with the currency losing over 90 percent of its value and over 80 percent of citizens falling below the poverty line.

On top of this, Lebanon only has the capacity to store one month’s worth of wheat reserves due to the Beirut Port explosion in 2020, which destroyed the country’s main grain silos.

Despite the growing crisis the country’s political elite have repeatedly delayed the rollout of two social protection programs to help vulnerable families and cushion them from the price hikes. Meanwhile, Economy Minister Amin Salam has announced that the Central Bank has “no capacity to pay higher prices” to subsidize wheat imports.

In Syria, the crisis has been exacerbated due to the US-backed war, which has left most infrastructure destroyed, while in rebel-controlled regions, humanitarian assistance is being widely misappropriated.

A report by the UN’s Office for the Coordination of Humanitarian Affairs (OCHA) published earlier this month revealed that at least 14.6 million people in Syria are in dire need of humanitarian assistance.

Out of that figure, six and a half million are children under the age of 17.

The report by the UN agency shows that 76 percent of Syrian households are unable to meet their basic needs, that 553,000 children are chronically malnourished, and 245,000 are acutely malnourished.

Yemen, which  has been the target of a brutal war launched by Saudi Arabia in 2015, is also facing a worsening humanitarian crisis due to the Ukraine conflict.

Skyrocketing food prices in recent years have left more than half of the population in need of food assistance, while a Saudi-imposed air and naval blockade prevents the country from receiving UN-authorized fuel and goods shipments.

On 14 March, the Integrated Food Security Phase Classification (IPC), a consortium of UN agencies and humanitarian organizations working in Yemen, warned that the hunger situation is worsening at an alarming rate.

According to UN officials, their projections show that between June and December 2022, the number of Yemeni citizens affected by famine will increase from 17.4 million to 19 million.

Despite these dire warnings, on 16 March the UN failed to raise enough funds for its Yemen aid plan, collecting only $1.3 billion in aid out of the $4.27 billion needed for 2022.

“We hoped for more and it is a disappointment we did not get pledges from some we thought we might hear from,” UN aid chief Martin Griffiths said at the fundraising conference.

“The dire situation … is one that needs money, funding – urgent, rapid, in the bank – for the people of Yemen,” Griffiths said, adding that the UN hopes to hold another pledging conference within the coming months.