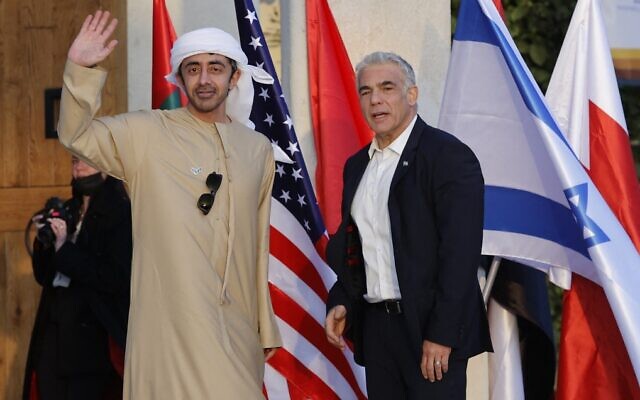 The Israeli-Arab summit that kicked off on 27 March in Sde Boker in southern Israel has entered its second day amid heightened security concerns following a shooting attack that killed at least four people in the city of Hadera a few hours after the start of the summit.

The military and police have ramped up security around the country especially in the region where the summit is taking place over fears that the event could also be targeted.

The summit, hosted by Israeli Foreign Minister Yair Lapid, is being attended by US Secretary of State Antony Blinken, and the foreign ministers of Bahrain, Egypt, Morocco, and the United Arab Emirates.

The summit is expected to be dominated by developments on the looming Iran nuclear deal. Tel Aviv, which is firmly opposed to deal, has been at loggerheads with Washington over attempts by the latter to rejoin the deal that is formally known as the Joint Comprehensive Plan of Action (JCPOA).

The deal collapsed in 2018 when then US president Donald Trump unilaterally withdrew from the deal and imposed punitive sanctions on Tehran.

In an address to journalists in Jerusalem on 27 March, Blinken said restoring the nuclear deal “is the best way to put Iran’s program back in the box it was in.”

Israel claims that Iran intends to use its nuclear program to acquire a nuclear weapon. Tehran has, however, insisted that its program is for peaceful civilian purposes.

Meanwhile, Palestinian resistance movements have condemned the summit as yet another attempt to legitimize the normalization deals that Israel signed with some Arab countries in 2020.

The so-called Abraham Accords, which were brokered by the Trump administration, have been widely rejected across the Arab world as a betrayal of the Palestinian struggle.

The Palestinian Authority (PA) accused Tel Aviv of using the summit to hide the atrocities it is committing in the occupied territories.

“This Israeli mobilization aims to cover up its actions of deepening settlement expansion and creeping annexation, Judaizing Jerusalem and preventing the establishment of a Palestinian state,” the PA stated.