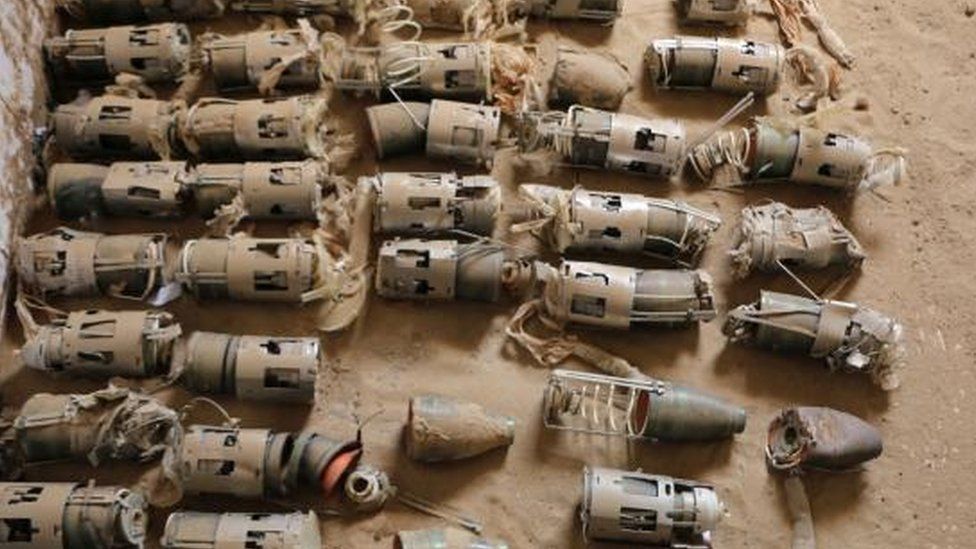 More than three million cluster bombs have been dropped in Yemen by the Saudi-led coalition since the war started in March 2015, according to Ali Safra, the director general of the Yemen Executive Mine Action Center (YEMAC).

At a ceremony in Sanaa to mark International Mine Awareness Day on 5 April, Safra outlined how cluster munitions were collected across 15 provinces and 70 districts in Yemen.

The use of cluster bombs by the Saudi-led coalition led to a civilian death toll of 3,921, and this included 119 children and 39 women, Safra said, while the wounded numbered 2,884 civilians, of whom 257 were children and 76 were women.

According to a UN report, by the end of 2021, the Saudi-led war in Yemen had killed about 377,000 people and left nearly half the country’s population on the verge of famine due to the naval blockade enforced by the coalition. Yemen’s economy is estimated to have lost $126 billion.

According to the report, most of the deaths – around 60 percent – were indirect consequences of the conflict, through lack of clean water, lack of food, and a prevalence of disease.

Seven years of war have had “catastrophic effects” on the development of the nation with access to healthcare “limited or non-existent,” and indirect victims being mostly “children especially vulnerable to malnutrition,” the report states.

On 1 April, UN officials announced that Saudi Arabia had agreed to lift the air and sea blockade imposed on Yemen, allowing ships carrying fuel and aid to the war-ravaged country to enter the port of Hodeidah.

The agreement began on 2 April, coinciding with the start of the Islamic holy month of Ramadan.

This deal marks the most significant step towards ending a conflict that has left hundreds of thousands dead, displaced millions, and has caused what the UN calls “one of the worst humanitarian crises of our time.”