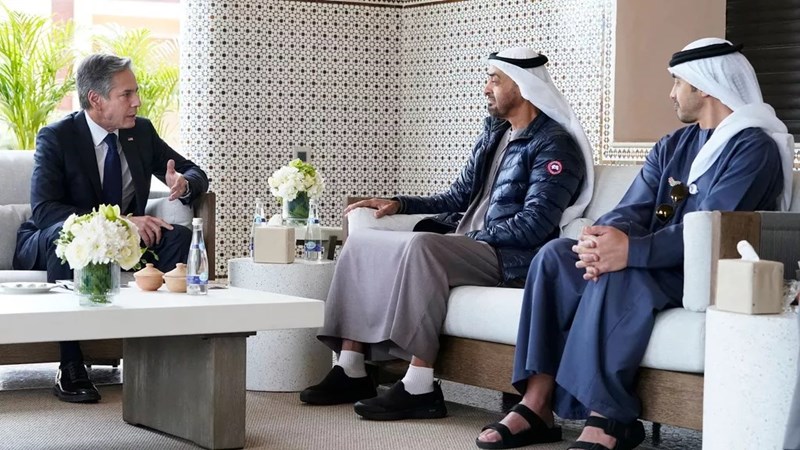 According to a report by Axios, US Secretary of State Anthony Blinken apologized to the UAE’s crown prince Mohammed Bin Zayed (MbZ) during their meeting last month for Washington’s slow response to the retaliatory strikes by the Ansarallah resistance on the Gulf country.

The UAE was also reportedly frustrated with the US refusal to re-designate Ansarallah as a terrorist group, prompting the GCC state to abstain from the UN Security Council vote condemning Russia’s special military operation in Ukraine.

Sources said that during the meeting, which took place on 29 March in Morocco, Blinken admitted that the US took too long to respond to Ansarallah’s retaliatory strikes against the UAE.

Blinken’s apology has been seen as an attempt by the US to ease tensions with Abu Dhabi, with the aim of bringing down global energy prices and preventing its Gulf allies from moving towards Russia and China.

According to the UAE’s ambassador to Washington, Youssef Al-Otaiba, the meeting helped alleviate some of the tensions and “move the relationship between the UAE and the US back on the right track.”

“The Secretary made clear that we deeply value our partnership with the UAE and that we will continue to stand by our partners in the face of common threats,” a senior State Department official said. The official refused to disclose further information regarding the details of Blinken’s conversation with MbZ.

The report coincides with the US announcement on 14 April that its navy will be setting up a new multinational task force to patrol the Red Sea, the Bab al-Mandab Strait, and the Gulf of Aden of Yemen’s coast.

The decision comes as both Riyadh and Abu Dhabi have pushed back against Washington’s demands amid a global fuel crisis, and signifies a US effort to reassure their commitment to the war efforts led by Saudi Arabia and the UAE in Yemen.