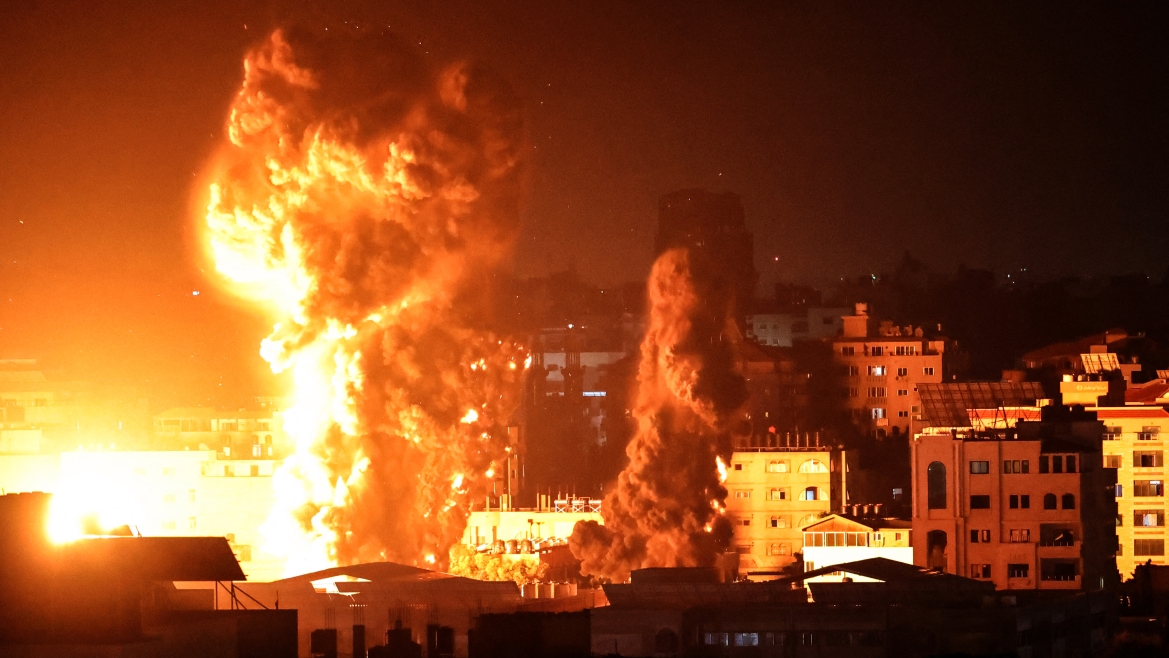 Fire and smoke rise above buildings in Gaza City as Israeli warplanes target the besieged enclave, early on 17 May, 2021. (Photo credit: Anas Baba/AFP)

The Israeli Air Force bombed the Gaza Strip in the early hours of 19 April in response to retaliatory missile strikes launched by the Palestinian Islamic Jihad (PIJ) into the Israeli settlements surrounding Gaza.

The PIJ attack was launched in retaliation for the brutal violence used on Palestinian worshippers at Al-Aqsa Mosque and the desecration of the Islamic holy site.

On 18 April, Israeli media reported that at least one rocket was fired by the PIJ from Gaza and that a response from the occupation air force was to be expected.

At 1:30am on 19 April, an Israeli airstrike on the Khan Yunis region of Gaza was reported.

A second airstrike in the same region was also carried out by the Israeli Air Force.

However, a relatively new weapon in the arsenal of the Palestinian resistance – SA7 anti-aircraft missiles – were launched by Al-Qassam Brigades against Israeli aircraft.

The moment Al-Qassam Brigades launched anti-aircraft missiles at the occupation warplanes that were launching their raid on a site of the Palestinian resistance in the south of Gaza. pic.twitter.com/RdObZOb3Gw

According to Palestinian resistance sources who spoke to Al Mayadeen, the anti-aircraft weapons are shoulder mounted and are armed with Russian Strela missiles.

The portability of such weapons presents an advantage compared to traditional air defense batteries, which are traditionally mounted on large vehicles similar to giant semi-trucks.

The use of such weaponry by the Palestinian resistance threatens Israeli air dominance and has the ability to carry out airstrikes with ease, forcing planes to fly at higher altitudes.

Despite the warnings of Palestinian resistance against repeated violations of Al-Aqsa Mosque and its worshippers, which included a limited missile launch from Gaza in retaliation, extremist Israeli settlers continued to storm the Islamic holy site on the morning of 19 April under the protection of heavily armed Israeli police forces.

This is the third consecutive day that provocative incursions have taken place inside Al-Aqsa, whereby occupation forces used violent tactics to suppress and disburse Palestinians to make room for the settlers.

The entry of extremist groups into the compound started at the onset of the Passover holiday, which lasts from 15–23 April. Israeli authorities have also closed off the crossings of the West Bank and Gaza during this period.

Similar provocations during the holy month of Ramadan in 2021 prompted the Palestinian resistance to retaliate against the Israeli occupation, leading to an 11-day war which saw the occupation troops kill over 250 Palestinians in Gaza.

Palestinian resistance movement Hamas stated that Al-Aqsa is a red line and the continuation of attacks on Palestinian worshippers and on the sanctity of Al-Quds would backfire on the occupation and its settlers.