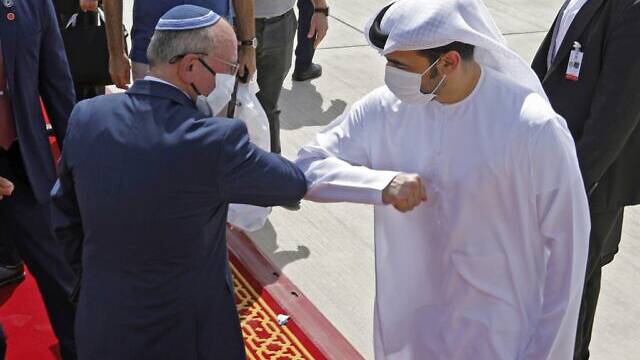 The Israeli embassy in Abu Dhabi hosted an event on 3 May to commemorate dead Israeli army soldiers, the first such event to be held in an Arab country.

This reflects increasing Israel’s influence among West Asian states that co-signed the so-called Abraham Accords, which were brokered by then US president Trump.

The UAE, in particular, seeks such systems in order to protect itself from retaliatory strikes launched by the Yemeni armed forces and Ansarallah resistance movement. These attacks are aimed at pressuring Abu Dhabi into ending its involvement in the US-backed, Saudi-led aggression against Yemen.

The Yemeni armed forces and Ansarallah have struck deep into Emirati territory, including striking Abu Dhabi on the same day that Israeli President Isaac Herzog made a historical visit to the Gulf country. The strike was considered a dual message to both the Saudi-led coalition and Israel.

The UAE and Israel also finalized a free trade agreement on 1 April.

“This milestone deal will build on the historic Abraham Accords and cement one of the world’s most important and promising emerging trading relationships,” UAE Foreign Trade Minister Thani al-Zeyoudi said in his announcement.

The UAE participated in an Israeli summit held in the occupied Negev desert in late March. The two-day diplomatic conference brought together the foreign ministers of Israel, Egypt, the United Arab Emirates (UAE), Bahrain, and Morocco. US Secretary of State Antony Blinken also attended the summit.

Palestinian resistance movements condemned the summit, saying the meeting reflects the loss of Arab identity among those who choose to normalize ties with the Israeli occupation.

According to a recent statement issued over concerns of rising escalations at Al-Aqsa Mosque in occupied Jerusalem, the UAE continues to support a two-state solution in Palestine.