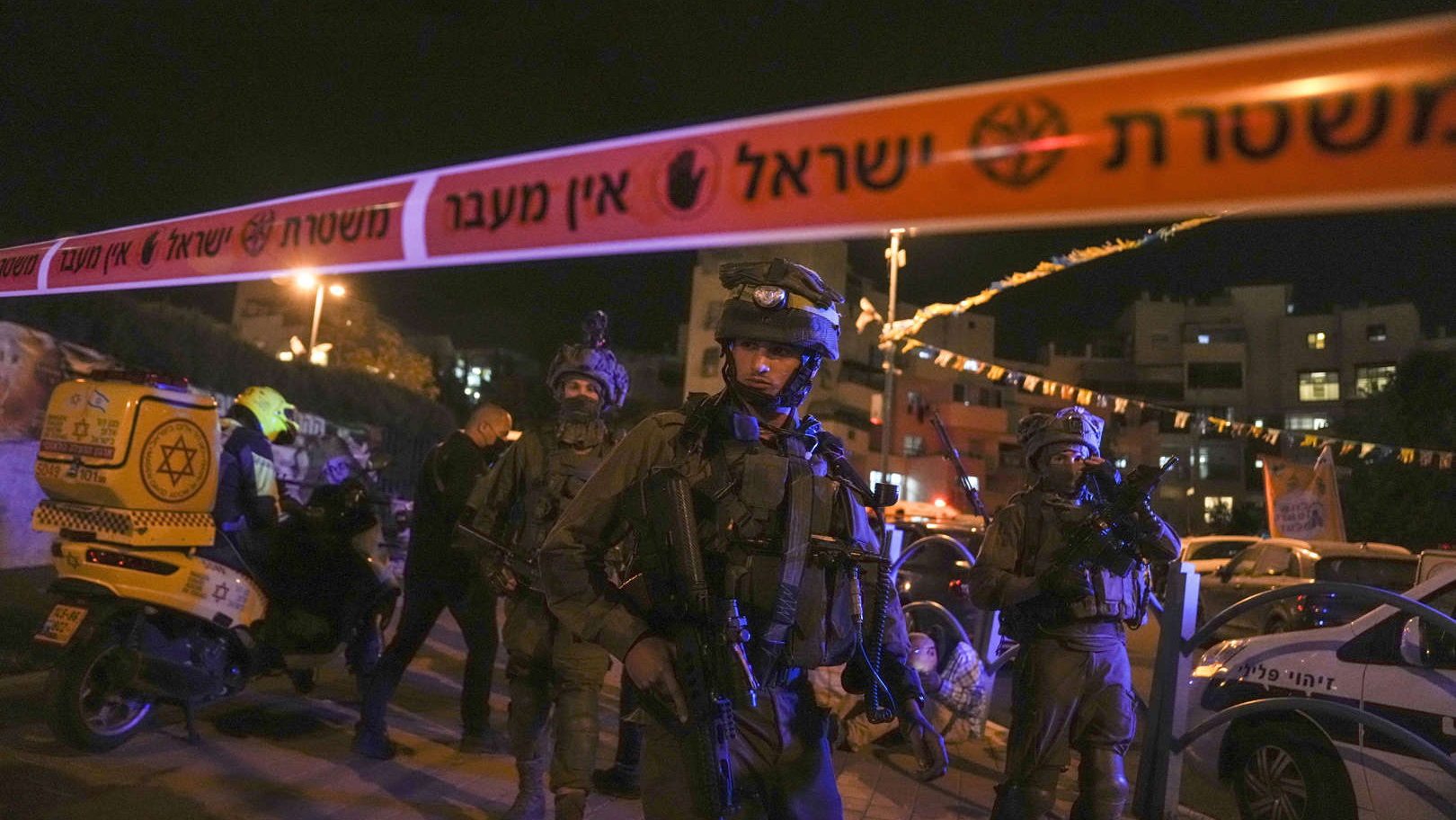 Israeli forces secure the area of a stabbing operation in the settlement of Elad on 5 May 2022. Israeli medics say at least three people were killed. (Photo credit: AP Photo/Maya Alleruzzo)

Palestinian resistance movement Hamas has claimed responsibility for Operation Elad, a stabbing attack which occurred against Israeli settlers in the Elad settlement of eastern Tel Aviv on 4 May.

The Palestinian attackers have so far evaded capture by Israeli forces, and the two suspects are believed to come from Jenin in the occupied West Bank.

The Palestinians reportedly used an axe to strike their victims, according to Israeli media.

Initial investigations: The attack in the Elad settlement targeted a celebration of the anniversary of the establishment of the State of Israel.

Israeli occupation forces are searching for the attackers who carried out the shooting and stabbing operation in Elad in central occupied Palestind. pic.twitter.com/13CxjzQ7E8

According to Hebrew Channel 12, the Israeli army opened an investigation to see if this operation was carried out in retaliation for the recent provocative raid on Al-Aqsa Mosque.

The Hamas statement provided an answer to this query.

Israeli settlers stormed the Islamic holy site on 4 May with protection from Israeli forces. The doors of one of the prayer halls were busted down and Palestinians violently chased from the premises.

The Israeli forces only resorted to arresting a few Israeli settlers due to their raising Israeli flags on the Al-Aqsa Mosque, likely due to fear of retaliation by Palestinian resistance for such acts.

The stabbing operation in Elad may have some symbolic significance.

Palestinians consider Israel’s so-called Independence Day as the Nakba, or ‘tragedy’ in Arabic, as the establishment of Israel was built on the ethnic cleansing of Palestinians through brutal massacres, forced expulsions, and other methods of striking fear into the hearts of the existing Palestinian population, causing many to flee from fear of being killed.

The Elad settlement was built over the ruins of a village called Al-Muzairaa, whose population fled in 1948 during the Nakba.

Hamas warned Israel that it is ‘playing with fire’ through increased provocations at Al-Aqsa Mosque. The Palestinian resistance organization based on Gaza recently claimed responsibility for the shooting operation at the Ariel settlement on 29 April which left an Israeli soldier dead.

On 30 April, Hamas senior official Yahya Sinwar warned that crossing red lines in Al-Aqsa would lead to a regional war.

Sinwar called on all Palestinians in the 1948 occupied lands to resist the Israeli occupation through any means at their disposal, in the event of an escalation into a major war over Al-Aqsa. He also called on Palestinian refugees in other countries to storm the borders and enter occupied Palestine.